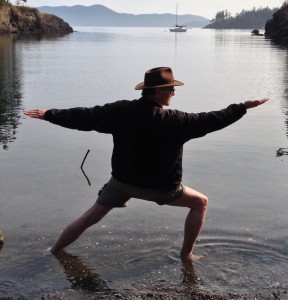 Recently, as I was getting ready to teach a room full of yogis, I noticed that almost half of the people in class were male. This was not normal. For a long time American yoga classes have been primarily filled with women, with a few men here and there. This seemed like a good sign, like some kind of yogic equality of the sexes.

Not long after, Bernie Connolly showed up at the studio. He was a certified yoga teacher who had earned his chops leading Boeing employees through sun salutations on their lunch hour. He was also teaching kids at a juvenile detention center. On the Island he was already teaching a small group of guys. One of his devout students asked to move the class into our studio, I said “let’s give it a try,” and we posted it as a Friday afternoon yoga class exclusively for men.

Now I like to think of our studio as inclusive but this class was an opportunity to give the guys an open space to be themselves with their tight hamstrings and hips. The guys say that Bernie is helping them heal their aching backs, and working with their aging bodies in a realistic and kind way. All I know is most of them show up each week faithfully, unroll their yoga mats, and begin to practice.

While it is true that some men enjoy being in a room full of women, and some enjoy attending yoga class with their wives, the Men’s class has a personality of its own. Bernie says there is room for a few more. What does it take to get started? Show up at Movement Arts any Friday before 1 pm and give yoga a try. Men Only Please…..

Please click here to familiarize yourself with our policies as we continue to navigate a safe re-opening of the studio. In order to meet state guidelines we have implemented a number of changes to practice as safely as possible.